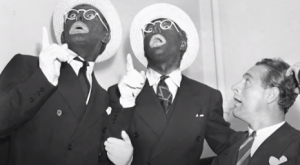 Blackface is a form of theatrical make-up used predominantly by non-black performers to represent a caricature of a black person. The practice gained popularity during the 19th century and contributed to the spread of racial stereotypes such as the “happy-go-lucky darky on the plantation” or the “dandified coon”. Black face was also used as a tool during the racially segregated era to discriminate against black people. White film makers used black face as a way to avoid hiring black people in TV shows and movies, often depicting the most negative stereotypes within black culture.

By the middle of the century, blackface minstrel shows had become a distinctive American art form, translating formal works such as opera into popular terms for a general audience. Early in the 20th century, blackface branched off from the minstrel show and became a form in its own right. In the United States, blackface had largely fallen out of favor by the turn of the 21st century, and is now generally considered offensive and disrespectful, though the practice continues in other countries.

This is a historical perspective about black face.

The moral of this story is simple, black face is highly offensive and never okay!!!