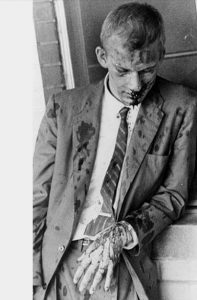 James Zwerg was born in Appleton, Wisconsin where he lived with his parents and older brother, Charles. His father was a dentist who provided free dental care to the poor on one day per month. He was very active in school and took part in student protests in high school.

On Mother’s Day May 14th 1961, a group of Freedom Riders were traveling by bus from Washington DC to New Orleans. They were met an angry white mob in Anniston, Alabama who attacked the bus with baseball bats and iron pipes. Rather than stopping, the bus driver continued past the bus station however the angry mob followed the bus in their cars then slashed the tires and a fire bomb was thrown into the bus.

After a brief discussion James Zwerg courageously volunteered to step off the bus first. He was beaten into unconsciousness and a man put James’s head between his knees while others took turns pounding and clawing at his face. At one point while James was unconscious, three men held him up while a woman kicked him in the groin. After it seemed that the worst of the onslaught was over, James gained semi-consciousness and tried to use the handrails to the loading platform to pull himself to his feet. As he struggled to get upright, a white man came and threw him over the rail. He crashed to the ground below, landing on his head.

James Zwerg was only the first to be beaten that day, but the attack on him may have been the most ruthless. James recalls, “There was nothing particularly heroic in what I did. If you want to talk about heroism, consider the black man who probably saved my life. This man in coveralls, just off of work, happened to walk by as my beating was going on and said ‘Stop beating that kid. If you want to beat someone, beat me.’ And they did. He was still unconscious when I left the hospital. I don’t know if he lived or died.

In a very moving and inspiring speech James Zwerg stated from his hospital room, “Segregation must be stopped. It must be broken down. Those of us on the Freedom Ride will continue…. We’re dedicated to this, we’ll take hitting, we’ll take beating. We’re willing to accept death. But we’re going to keep coming until we can ride from anywhere in the South to any place else in the South without anybody making any comments, just as American citizens.”

Freedom Riders: This is James Zwerg in his own words describing his experience the day of the attack against the Freedom Riders.

Brotherhood Connection: Congressman John Lewis and James Zwerg in a very moving interview speaking on how their relationship started, their experiences together and why they are eternal brothers.

Reflection: There are many people who have sacrificed their lives for the advancement of civil rights. Although the civil rights movement was primarily lead by prominent Black people, there were many white people who got involved in the movement sacrificing their own physical and mental well being.

James Zwerg took the brunt of the attack against the Freedom Riders as he was the first one to steps off the bus. There are no words to express the debt of gratitude we all owe James for his sacrifice and resilience in the civil rights movement.

John 15:13: Greater love has no one than this: to lay down one’s life for one’s friends.

James Zwerg was very active in the Christian church, where he attended services regularly. Through the church, he became exposed to the belief in civil equality. He was taught that all people are created equal, no matter what race or religion they are. James was one of only a handful of white Christians to join the non-violent movement and we are eternally grateful for his courage and sacrifice for equality and justice.