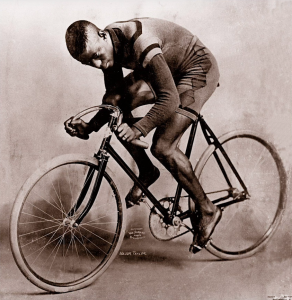 Major Taylor was the first “American” Black World Champion of any sport. There’s also a movie about his life which highlights the infamous “6 Day Race” going against all odds and societal oppression he not only became the first black American World Champion, he also became a worldwide celebrity. People came from all over just to see him race in competitions against highly skilled white competitors. Not only did he compete, he won most of the races he entered.

Here is a video which recounts Major Taylor’s experience during the 6 Day Race.