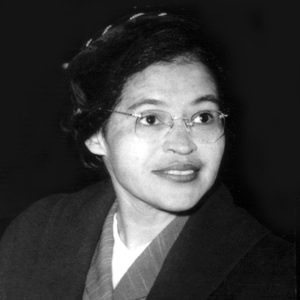 Rosa Parks Biography In Her Own Words: Listen as Rosa Parks tells her story in her own words.

Rosa Parks Interview: Enjoy this indepth interview with Rosa Parks as she speak about various aspects of her life and gives her own unique perspective.

Rosa Parks Biography: Checkout this shortened well informed recount of the life and times of “The First Lady Of Civil Rights”, Rosa Parks.

Reflection: Rosa Parks was one of many Civil Rights leaders who sacrificed their lives for equality. Growing up in the bussing era where kids were bussed across town in order to integrate the schools, I remember students being proud to sit in the front. I truly appreciate Rosa Parks for her foresight and determination during the struggle for freedom.

When Rosa Parks wrote her autobiography she emphasized the fact that “more work needed to be done in the ongoing struggle for justice”, which remains true today.
Much love and respect to Rosa Parks, “The First Lady Of The Civil Rights Movement”.